More Vintage Broadway Under The Stars 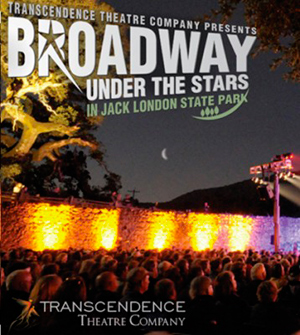 Greetings – friends of dance. Glad you could join us. Last time, we brought you the fascinating story behind Sonoma Wine Country’s Transcendence Theatre Company (TTC). Today’s follow-up piece uncovers what drives TTC’s resonating effect on audiences; and concludes with some invaluable insights and extras for the aspiring and Broadway-bound.

First order of business is to convey our literal play on words: “Vintage Broadway” – a mere inception of convenience, to describe TTC’s distinctive production concept in short – live Broadway performed amidst a wine country backdrop. In these modern times when even the world’s most prominent arts organizations have struggled to survive, how such an elaborate new concept turned reality is truly remarkable.

Much to TTC’s advantage, arts enthusiasts in Northern California are abundant. One region where resident professional, performing arts organizations are in short supply however, is San Francisco’s North Bay. While location plays a crucial part in TTC’s good fortune, the same result under any other group of artists would be unlikely, as TTC’s founding members are a rare bunch – they are a team of six like-minded, accomplished artists sharing a common vision, with equal determination in seeing their endeavor through.

When TTC introduced their production series “Broadway Under the Stars” to audiences in 2012, not only was it an instant smash, but its impact on the community at large helped position the region as more than a wine and cheese destination.

More sold-out programs and rave reviews made TTC’s second annual season (which wrapped up in late August 2013) another good, vintage Broadway year. Programs that dazzled included: the all dance inspired production “Dancing Through Life” featuring song and dance from “Chicago,” “Crazy For You,” and “A Chorus Line;” the one night only “Evening w/Sutton Foster” featuring the two-time Tony Award winner/star of the ABC Family-TV series “Bunheads;” and the “one – singular sensation,” tap dancer/Celtic fiddler Stephanie Cadman – who returned with her musical trio for an encore performance, after being named TTC’s “Audience Favorite” in 2012.

Planning such an elaborate performance series may not sound like a picnic in the park for event organizers, but that’s precisely what it is for spectators. Inside the stunning, old century winery ruins of Jack London State Park, spectators can enjoy pre-show picnicking with entertainment, and taste the luscious fruit of the land offered by a collection of Sonoma wineries who partake in each event.

Currently, TTC is busy at work setting the stage for the summer 2014 season. The latest news from the source is – expect lots more dance, as the crowds here love it. Though TTC’s program for next season has yet to be officially announced, here’s what we know:

Broadway Under The Stars 2014/Season 3

Off-stage, TTC’s presence is every bit as impressive. Their popular summer workshop Broadway Kids Camp has reached capacity for two consecutive years. The program serves as an invaluable outlet for youth age 8-18 wishing to explore their inner talent(s). Open to all experience levels, students have an opportunity to train with the pros during a week-long, mid-summer workshop that includes instruction in acting, improvisation, vocal performance, jazz, tap, and ballet. Creative thinking exercises include detailed sketch writing and journaling based on daily themes.

TTC artistic director/CEO Amy Miller describes the programs objectives: “Transcendence Theatre focusses on creating a nurturing, supportive, and non-competitive environment that inspires and empowers all of our artists to grow to their full potential as artists and human beings.”

Professionals – should you be interested in future casting opportunities, you are encouraged to submit headshots, resumes, and video links with performance footage year-round. Email: casting@yahoo.com

Until next time. Live. Dance. And Prosper.

Freelance writer Jasmine Rios/aka Mina by trade – found inspiration in dance through film and exposure to live performances at an early age. Trained in music, theatre, and dance; followed by study in Journalism & Mass Communications, Rios now writes for publications which include: Dance International Magazine, Dance For You Magazine, ExploreDance.com, and the North Bay Bohemian newspaper; she is also the founder of Mina Communications – a consulting business for the arts.

The Best Holiday Dance Movies to Get You Into the Holiday Spirit!

The Nutcracker and the Four Realms (2018)

Comments are closed, but trackbacks and pingbacks are open.